EXECUTIVE SUMMARY: US CAATSA sanctions on Turkey’s defense industry are now official. The costs to Turkey of its S-400 deal with Russia have been enormous, both strategically and economically. Those costs will continue to rise exponentially and will push Turkey further into the Russian orbit.

Only three days after Turkey’s Islamist strongman Recep Tayyip Erdoğan sighed with relief at having side-stepped heavy European sanctions, he got slapped with heavy American ones. In this three-party game, Turkey is the loser, Russia is the winner, and the West is breaking even.

At a summit on December 10-11, the leaders of the EU agreed to impose light sanctions on an unspecified number of Turkish officials and entities involved in gas drilling in disputed Mediterranean waters. They deferred more punishing sanctions, such as trade tariffs or an arms embargo, until after they consult with the incoming Biden administration. 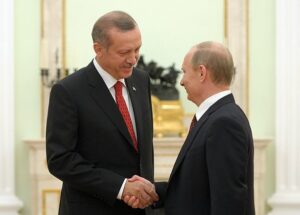 But on December 14, the US announced that it would be imposing sanctions on Turkey via the Countering America’s Adversaries Through Sanctions Act (CAATSA) for its purchase of the Russian-made S-400 long-range air and anti-missile defense system. Secretary of State Mike Pompeo said the US would ban all export licenses and authorizations for Turkey’s defense procurement agency (SSB in its Turkish acronym) while issuing asset and visa restrictions against SSB’s president, Ismail Demir, and other Turkish defense industry officials. “Despite our warnings, Turkey moved ahead with its purchase and testing of the S-400 system from Russia. Today’s sanctions on Turkey’s SSB demonstrate the US will fully implement #CAATSA. We will not tolerate significant transactions with Russia’s defense sector,” Pompeo tweeted.

This is not the only price Ankara will have to pay for Erdoğan’s Russian romance. Turkey has paid $2.5 billion for a defense system it will probably never use. Over the summer, Turkey test-activated the S-400 system and then re-packed it again. Quite an expensive device to put back in the box.

In addition, the S-400 acquisition has cost Turkey its partnership in the US-led multinational Joint Strike Fighter program, which is building the next-generation F-35 fighter, the Lightning II. Turkey’s dismissal from the program will cost its own defense industry around $10 billion over the next 10 years. The dismissal also deprives the Turkish Air Force of a strategic firepower asset. To add insult to injury, the F-35s denied Turkey will now go to the air force of its rival, Greece. “The United States welcomes ‘at the highest levels’ Greece’s interest in purchasing F-35 fighter jets,” said US Ambassador to Athens Geoffrey Pyatt. Greece wants to buy 18 to 24 used or new F-35s.

And that’s not all. The CAATSA against Turkey includes “all export licenses,” which means Turkey will not be able to export any weapons systems to third-party countries if those systems include US-made parts. The Turkish helicopter gunship is a good example.

In 2018, Turkish aerospace powerhouse TAI signed a $1.5 billion contract to sell a batch of 30 T129 attack helicopters to Pakistan. But there was a snag, which has now been formalized. The T129 is a twin-engine multi-role attack helicopter produced under license from the Italian-British company AgustaWestland. It is powered by two LHTEC T800-4A turboshaft engines. The T800-4A is an export version of the CTS800 engine. LHTEC, the maker of the engine, is a joint venture between the American company Honeywell and Britain’s Rolls-Royce. The US sanctions have thus officially killed the $1.5 billion deal between Turkey and Pakistan.

“The people of Turkey are still our friends. But their leadership has chosen to abandon thousands of F-35 jobs, which will dry up once manufacturing stops in 2022, and to invite sanctions on an already struggling economy. It didn’t have to be this way. Yet Turkish leadership is pressing forward and earlier this year reportedly test-fired the Russian missile-defense system,” US senators Lindsey Graham and James Lankford wrote in the Wall Street Journal. “The US has an obligation to protect American interests from threats from Iran, Russia and North Korea. Turkey needs to understand the consequences of its decisions.”

Another strategic Turkish defense program is for the production of the country’s first indigenous main battle tank, the Altay. The next-generation tank would have been powered by a German engine and transmission had Turkey not been embargoed by Germany. Endless rounds of talks with alternate Western manufacturers have failed. Turkey’s defense procurement officials most recently turned to South Korea for a solution that can salvage the Altay program, which is already burdened by major delays.

Earlier this year, the Canadian government suspended export of key drone parts to Turkey. High-tech sensors and targeting technology produced by L3Harris WESCAM, an Ontario-based company, were used in Turkey’s finest armed drones, the Bayraktar TB2. The Turkish army has been successfully using the TB2 in its fight against Kurdish militants inside Turkey as well as in northern Iraq and northern Syria, and the drone has been used in support of one fighting side in Libya’s civil war. Most recently, there were reports that the TB2s were used by the Azeri army in the armed conflict between Azerbaijan and Armenia over Nagorno-Karabakh.

But Erdoğan refuses to acknowledge his mistakes or his failures. In 2019, when the threat of US sanctions was crystal clear, Erdoğan said that in addition to the S-400 acquisition, Turkey and Russia would jointly produce the S-500, an advanced version of the air defense system. “There will be joint production of the S-500 after the S-400,” he told an audience in May 2019.

As recently as August 2020, Russia and Turkey signed a contract on the delivery of the second batch of S-400s. “The contract has been signed,” TASS news agency reported, quoting Alexander Mikheyev, the head of Russia’s state arms exporter, Rosoboronexport.

As Putin must have calculated from the beginning, Western embargoes and sanctions on Turkey will likely push the NATO ally further into Moscow’s orbit, especially in defense procurement. This will pave the way for exploratory efforts to see what systems Russia can supply to Turkey and what (limited) degree of technology transfer it may allow. And why not? Turkey may become the first NATO ally to have Russian fighter jets in its fleet.

Burak Bekdil is an Ankara-based columnist. He regularly writes for the Gatestone Institute and Defense News and is a fellow at the Middle East Forum.