EXECUTIVE SUMMARY: The recent escalation of tensions in the Aegean has the potential to strengthen the political bond between Greece and its Western allies, as well as force the EU to shift from threatening sanctions on Turkey to actually imposing them. Turkish president Recep Tayyip Erdoğan will try to keep tensions high enough to present a heroic front to his Islamist/nationalist base but not high enough to trigger EU sanctions.

David L. Phillips, director of the Program on Peace-building and Rights at the Institute for the Study of Human Rights at Columbia University, recently said:

On the one year anniversary of Turkey’s invasion and occupation of Rojava (Northeast Syria), Erdoğan is seeking to distract Turks from Turkey’s failed democracy and faltering domestic economy by war-mongering in Syria, Iraq, Libya, Somalia, and the Eastern Mediterranean. Turkey and its jihadist proxies are also threatening another Armenian Genocide, targeting Armenians in Nagorno-Karabakh.

NATO is more than a security alliance. It is a coalition of countries with shared values. Turkey under Erdoğan’s dictatorship is Islamist, anti-American, and hostile to Europe. Turkey’s application to join NATO would be discarded immediately if it applied today.

Phillips was one of the signatories to a statement, “It’s Time to Break with Erdoğan”, published on October 9 by Justice for Kurds Chairman Thomas S. Kaplan and President Bernard-Henri Lévy in a two-page center spread of The New York Times. 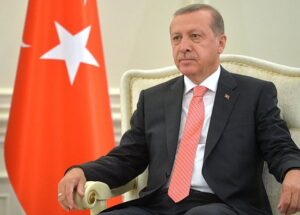 A few days after the publication of the Times statement, the tug-of-war in the Aegean and Mediterranean Seas grew even more tense between traditional rivals Turkey and Greece. Athens declared a NAVTEX (Navigational Telex) for firing exercises in the Aegean covering a period including October 29, Turkey’s national day. Ankara responded by declaring its own NAVTEX in the Aegean for October 28 and decided to send its Oruç Reis survey vessel to the disputed continental shelf just 6.5 nautical miles off the Greek island of Kastellorizo.

This escalation has the potential to augment the political bond between Greece and its Western allies as well as force the EU to shift from threatening to sanction Turkey to actually sanctioning Turkey.

On October 14, German FM Heiko Maas called off his planned trip to Ankara to demonstrate the solidarity and support “that Greece has from us, everyone in the European Union and Germany.” He also reminded his listeners that the NAVTEX crisis with Turkey will be discussed at the forthcoming EU summit, a hint at potential sanctions.

The US State Department called the Turkish move a “calculated provocation.” “Turkey’s announcement unilaterally raises tensions in the region and deliberately complicates the resumption of crucial exploratory talks between our NATO allies Greece and Turkey,” spokesperson Morgan Ortagus said in a statement. “Coercion, threats, intimidation and military activity will not resolve tensions in the Eastern Mediterranean.”

Erdoğan has ideological, diplomatic, and pragmatic reasons to escalate. Ideologically, his dogmatic Islamism is inherently anti-Western. He loves to portray any dispute through the lens of an unsophisticated parochialism that can be summed up in the phrase “We are good Muslims who oppose the infidels.” He will try to keep tensions high enough to show a heroic front to his Islamist/nationalist party fans, but not so high as to spark EU sanctions at a time when Turkey’s economy is sputtering. On the pragmatic level, Erdoğan knows any foreign confrontation will boost his approval rating at home.

Ankara has more options with which to antagonize Greece, including weaponizing the Turkish Straits.

The 1936 Montreux Convention Regarding the Regime of the Turkish Straits established the Bosporus as an international shipping lane, but gave Turkey the right to restrict ships from non-Black Sea nations. About 3 million barrels of crude and 20 million tons of petroleum products cross the Bosporus every year, and these numbers will likely increase in the near future. More than 40,000 vessels passed through these waters in 2019 while transporting almost 650 million tons of cargo. This level of traffic reaffirmed the Turkish Straits as one of the most important maritime trade corridors in the world.

In 2019, Greek-owned ships represented nearly 21% of the global merchant fleet’s capacity and 53% of the EU’s, with 4,936 ships over 1,000 gross tons and a total capacity of 389.7 million deadweight tons. Greek-owned ships account for 32% of total tanker capacity, 23% of dry-goods ships, and 15% of chemicals and petroleum products capacity. In 2018, shipping money into the Greek economy was 16.6 billion euros. These numbers make Greek shipowners the largest group by nationality. It would thus be a serious blow to the Greek economy if Turkey were to restrict Greek shipping traffic through the Turkish Straits.

“Turkey has a right to close its straits to shipping traffic citing security threats in the Aegean and Mediterranean Seas,” said Lt. Col. (r.) Mithat Işık. “Turkey can consider closing the Straits if [tensions with Greece] continue like this.” He cited Article 20 of the Montreux Convention: “In time of war, Turkey being belligerent, the provisions of Articles 10 to 18 shall not be applicable; the passage of warships shall be left entirely to the discretion of the Turkish Government.”

According to retired admiral Cihat Yaycı, “If the EU imposes sanctions on Turkey, Ankara can force all commercial shipping traffic into day time, declare guide boats obligatory, determine shipping routes … Turkey can slow down the passage of Greek and Greek Cypriot ships … it can even close the Straits.”

Is this true? Not really. Turkey can use articles of the Montreux Convention as a pretext to re-regulate shipping traffic through the Turkish Straits only during wartime.

“Like all multinational conventions the principle of bona fide applies to the Montreux Convention. Signatories are expected to act in good faith when they interpret and implement the convention,” said one senior Turkish diplomat. “It won’t bring any good to Turkey if Ankara went for restrictions on shipping traffic just because ‘these days we dislike our Aegean neighbors.’”

That sums it up. It seems Turkey will try to sustain an optimal level of tension over the Aegean: hot enough to keep Turks united behind their leader, but not so hot as to provoke heavy-handed Western retaliation.

Burak Bekdil is an Ankara-based columnist. He regularly writes for the Gatestone Institute and Defense News and is a fellow at the Middle East Forum.