There are success stories in the region that provide positive examples of how a new collective reality can be created through the initiative of the main actors. Deeper cooperation and synergies can prove highly constructive for the region. 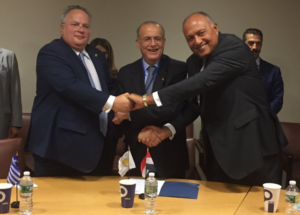 The COVID-19 pandemic is only the tip of an iceberg of sociopolitical and economic challenges the Eastern Mediterranean is currently facing: Turkish revisionism; continued Greek economic fragility despite the good performance of Kyriakos Mitsotakis’s government; the turbulent coexistence of secular and ultra-religious elements in Israel; the spread of radicalism and jihadism within the Palestinian community; the continued occupation of Northern Cyprus by the Turkish army; constitutional weaknesses and economic failures in Lebanon along with strengthening of Shiite fundamentalism there due to the long political vacuum; the stagnation of Syria as a failed state and the long Libyan Civil War are but a few of the region’s troubles.

The first approach argues that if a state or region seeks a pathway toward stability and progress, it must first deal with the many challenges at hand. It disregards the fact that the 21st century is not the 20th, and that there are neither sufficient means nor enough time to achieve so herculean a task. The second approach urges the political entity to push forward and simultaneously find solutions to its current predicaments while ensuring its future prospects.

The Platonic approach tends to be favored by inefficient governments that hide their failures behind structural drawbacks, avoiding any step outside their safety zones of conventional thinking or practice.

Examples of states in the Eastern Mediterranean and Middle East that have efficiently put into practice the Aristotelian form of governance are the UAE, Saudi Arabia, and Israel. While they are fully dynamic in terms of foreign policy, these states also follow constructive policies on the domestic front. Even as Israel has to find solutions to daily threats that challenge its very survival, it has made itself into a “start-up nation” with one of the most technologically advanced militaries in the world. The military’s edge is a tremendous boost to both the Israeli economy and national prestige. The UAE, while being targeted by Shiite and Sunni radicals, continues to grow as a cosmopolitan hub that is a top tourist destination, a global champion of culture and sports, and a smart nation with top achievements in AI and in the energy sector. Saudi Arabia has entered a phase of profound advances in both economy and society, though modernization will be a long and bumpy process. The kingdom is still a conservative political entity with a firm religious structure and sui generis political functioning. Nevertheless, Riyadh has opposed religious radicalism (both Sunni and Shiite) and is a pillar of stability and rationality for the global crude oil market.

These three smart states are all pioneers in various aspects of international politics, technology, civic structure, and inter-religious dialogue. Their successes underline that it is irrational for the Eastern Mediterranean region to ignore its economic reconstruction or technological advancement while it deals with its geostrategic challenges. It is not sensible for the region to concentrate on those challenges at the expense of modernizing its economies and institutions, and vice versa.

The Eastern Mediterranean is facing major existential dilemmas to which the primordial question “Guns or butter?” provides no answers. There are neither sufficient funds nor sufficient hard power capacities to pacify the region. That collective incapacity to resolve regional issues works to the benefit of Turkish strategy.

Ankara’s own central problem is that its maximalist political aspirations do not remotely correlate to the state’s economic capacity. For years, Turkey has been behaving like a sort of Blanche Dubois, surviving economically due to the kindness of Qatari strangers. Meanwhile, Russia controls Turkey’s nuclear energy prospects even as President Erdoğan has made successful steps in the LNG market that minimize Turkey’s dependency on Russian LNG exports.

Erdoğan pursues military and political crises to justify his own grandiloquence, but Ankara knows it cannot maintain a front of antiquated rhetoric with jingoist rallying round the flag if the rest of the region becomes more politically and economically stable.

The key to resolving the Eastern Mediterranean’s problems is for the actors to work collectively and not individually. The region needs to take a big step and start to cooperate as a group in the areas of defense, technology, academia, and economy. A stable future for the region rests on an improvement in the collective prospects of states like Greece, Israel, Saudi Arabia, the UAE, Egypt, and Jordan, as well as perhaps Syria, Libya, and Lebanon under certain circumstances that mainly have to do with their domestic political status. A “Partnership for Progress and Peace in the Eastern Mediterranean” could enhance peace and security while showing that inter-religious dialogue can inoculate the region from a “clash of civilizations” crisis.

Some may argue that the establishment of a multinational body in the Eastern Mediterranean may create a security dilemma for Turkey, leading the region into a Thucydides Trap. I argue against this, as the best deterrence against Turkey’s revisionist path is organized action combined with economic and trade cooperation among its regional neighbors. As Stephen Walt aptly observed, one of the main triggers for the formation of an alliance is the need to counter a threat coming from a difficult state or group of states. Turkish moves in the Eastern Mediterranean are a clear and consistent threat. A traditional type of deterrence; i.e., a hard-power alliance, is a necessary prescription, but it will not take the region to its fullest potential.

The immediate creation of economic, technological, and educational synergies is essential if the Eastern Mediterranean is to be a peaceful, stable, and prosperous part of the globe. This is a political initiative that the leaders of the region must put forward, with the inclusion of Turkey when and if it decides that being a good neighbor is preferable to being a neo-Ottoman perpetual aggressor.

Dr. Spyridon N. Litsas is Professor of International Relations at the University of Macedonia and Visiting Professor of Strategic Theory in the Supreme Joint College of War of the Hellenic Armed Forces.