At a time when his regime is faced with serious challenges at home, his Mediterranean adventures have been good for Turkey at the regional level.

Other powers will have to consider how to respond to Turkey’s moves. Washington’s lukewarm support for the trilateral partnership of Israel, Cyprus, and Greece, for example, has not met the high expectations of those countries, which continue to function as a pillar of stability in the Basin. 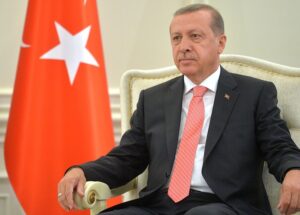 Recep Tayyip Erdogan, image via Office of the President of Russia

“Instability in the Eastern Mediterranean” is a commonplace phrase, and with good reason. In parallel with the civil wars in Syria and Libya, the power play between the US and Russia, the Israeli-Palestinian conflict, and Iranian aggression in the Basin, the Turkish regime is seizing the opportunity to take on a newly muscular role.

Ankara’s military involvement in Syria and Libya is only one of many initiatives. Others include the recently sealed military cooperation agreement with Albania, drilling operations in Cypriot waters, and announcements that Turkey plans to drill in Greek waters as well. (With that said, the research activity of Turkey’s Oruç Reis vessel has been put on hold as part of Ankara’s “constructive” approach to negotiations with Athens—negotiations that have an unclear agenda as yet.)

Turkey is counting on good relations with Italy and is enhancing military ties with Malta, probably to support its activities in Libya. At the same time, Turkey has serious disagreements with President Sisi’s post-Brotherhood Egypt on a variety of fronts.

Israel, for its part, is exploring whether cooperation with Turkey is possible, at least to some extent. This cooperation would principally refer to the two countries’ common interest in thwarting Hezbollah in Syria. However, recent comments by President Erdoğan that he intends to “liberate” the al-Aqsa mosque after turning Hagia Sophia into a mosque complicate the situation, as do his objections to the possibility of the application of Israeli sovereignty over parts of the West Bank. As a Jerusalem Post editorial recently put it, “Turkey is increasingly becoming a threat to Israel.”

The US is the world’s only superpower, and it wants stability in the Middle East. But the way the current administration has responded to challenges in the Eastern Mediterranean reflects its lack of appetite for engagement in the region (with the exception of its continued contribution to Israel’s security). Washington has been very hesitant, for instance, to actively support the trilateral collaboration of Israel, Greece, and Cyprus despite its initial enthusiasm and the participation of Secretary of State Mike Pompeo in the March 2019 Jerusalem summit alongside PMs Netanyahu and Tsipras and President Anastasiades.

The drop in energy prices due to COVID-19 and the lack of financing render the realization of the EastMed pipeline project almost impossible. Turkey is the clear winner of that development, even if the proposed Turkish-Israeli pipeline will not be constructed anytime soon either.

The outlook is grim. A military incident between Greece and Turkey could occur in the Aegean, with the US keeping its distance; and a clash between Ankara and Cairo in Libya is entirely possible. NATO’s image is tarnished. During a period when the Alliance is taking steps to bolster its presence in the so-called “South,” its contradictory role in Libya in 2011, along with Greek-Turkish tensions and Turkish-French spats, cannot be sidelined. Not long ago, for example, the Turkish Ministry of Foreign Affairs criticized France for failing to be impartial. French President Emmanuel Macron then posted a Facebook message in Greek exposing Turkish tactics in the Eastern Mediterranean.

Erdoğan has taken serious geopolitical risks at a time when he is faced with domestic economic turmoil and the emergence of ambitious political opponents. His practices are increasingly subject to international criticism. His actions in the Eastern Mediterranean have nevertheless been vindicated to an extent, because they have garnered results.

The Turkish-Libyan MoU on maritime zones, for example, remains in force, though it is considered illegal by some countries, including Israel. Ankara continues to defy American pressure on several issues. Erdoğan has, in fact, reversed course only once: In the summer of 2016, when he apologized to Putin for Turkey’s downing of a Russian warplane. Erdoğan took that step to reinvigorate Russian-Turkish relations and stop the economic hemorrhage of his country.

Ankara understands Washington’s foreign policy priorities and shift of focus toward Asia. It is leveraging the transformation of its military industry as it looks both westward and eastward in the hope of benefiting from the rise of other powers—particularly Russia and China—and regional players like Iran.

While Turkey’s current policies are associated with a single individual, it is questionable whether or not a political change in Turkey would lead to radical changes in the country’s orientation. The West would do well to face that reality rather than rely on wishful thinking about a post-Erdoğan era.

Turkey believes its regional empowerment—despite the political and economic cost—gives it more room to bargain with its partners. (The personal chemistry between Presidents Trump and Erdoğan, while relevant, is often overstated.)

Ankara showed clear signs of its intentions during the US administration of Barack Obama, which allowed it to act undisturbed, for example in Syria. Some problems could be solved at the EU level, but Brussels prioritizes economic matters over security calculations. In a recent analysis, Turkish FM Mevlüt Çavuşoğlu proposed the construction of an “inclusive framework” of EU-Turkey cooperation, and in the process condemned France and labeled the claims of Greece and Cyprus in the Eastern Mediterranean “maximalist” and “unilateral.”

The members of the EastMed Gas Forum—Israel, Greece, Cyprus, Jordan, Egypt, Italy, and the Palestinian Authority—have lost momentum due to COVID-19 but need to develop a clear agenda. Further delay will undermine their ambitious initiative and give Ankara more time to act. Antipathy toward Turkish actions in the Eastern Mediterranean is an understandable reaction, but it does not constitute a policy.

Dr. George N. Tzogopoulos is a BESA Research Associate and Lecturer at the European Institute of Nice and the Democritus University of Thrace.